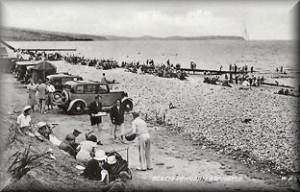 I came across this photo of a model of Rhyl Pier as it was in its heyday. It was originally 2,355 feet long and was 60 feet longer than Llandudno Pier. With all the talk and arguments over the future of Colwyn Bay Pier I thought it was appropriate to remind us all how Rhyl Pier looked. What a shame that through misfortune it slowly reduced to the last 300 feet when it had to be finally removed for safety reasons in 1973. I remember walking to Rhyl with my older brother and taking shelter from the weather underneath the pier before going to the cinema. Let us all hope Colwyn Bay Pier has a better future.

Picture reproduced with kind permission of Paul Baker at Diabolus.

In those days, there were no antibiotics available, so if you were diagnosed with Tuberculosis the best cure was fresh air and rest. This meant sleeping outside. 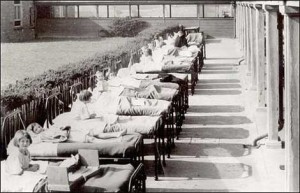 Kinmel Park Camp was built in 1914 as a training camp for Lord Kitchener’s Army in preparation for serving in the First World War. It had its own branch railway line connecting to the main line at Foryd Station in Rhyl. It’s famous for the Kinmel Park Riots, March 1919, which were believed to be caused by delays in repatriation of the Canadian soldiers who on their way home from France. 5 men were killed but their story is for a separate post. If anyone has something to add please leave your comments.

A few pictures of Kinmel Park Camp to remind us the past.

When I grew up, one of our neighbours worked at Kinmel Park Camp, and so we occasionally used to visit the cinema there. I believe this picture was taken in the 1930’s. 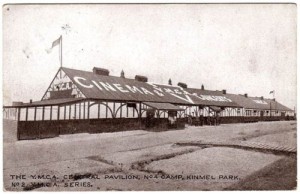 Interestingly, although it was a training camp, and from what I believe, conditions were fairly basic at best, they used to sell postcards. I presume they were aimed at the soldiers to send home. 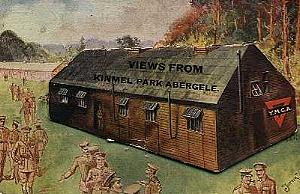 Because it was a training camp for soldiers in the First World War they had a trench warfare training area. There is still evidence of this area to the rear of Bodelwydden Castle. 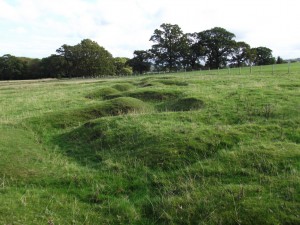 Here’s a link to a BBC story about the riots.

Look at these three postcards from the Camp.

Coflein describes Kinmel Military Camp as a huge facility constructed during the First World War. It was served by the Kinmel Camp Railway from Foryd Junction on the North Wales main coast line from 1915. The Camp is infamous for the riot of homesick Canadian troops in 1919 awaiting de-mobilisation after the war.
Most of the site is now an industrial estate but a part to the south of the A55 road (which cuts through the site) is still in military use: it includes a camp, small-arms ranges and a dry training ground. As well as accommodating up to 250 troops, it is used as a base for training in nearby Snowdonia National Park. Several original buildings are believed to remain in this area.

Please add any comments about Kinmel Park Camp to this post. It would be great to hear from someone who served or worked there.

In September + October 2018 this site was hosted on a server which was attacked by malware. I've just moved this site to a new more expensive host. If you'd like to make a monthly or one-off contribution to help AbergelePost.com continue, and to secure this archive, please donate here: